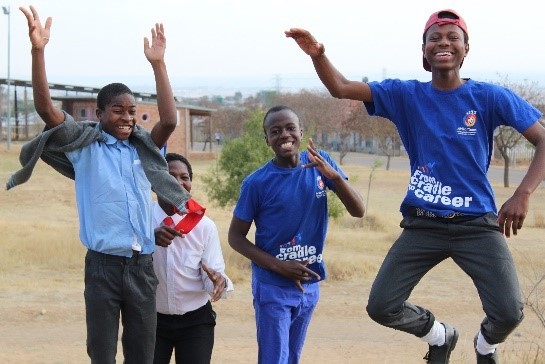 This is a story of a young man’s journey to self-discovery. Coming from a community where drugs and violence are a norm for young men his age, Prime Nchabeleng (17) chose a different path.

When a young boy reaches the critical pre-teen ages between 11-13 years, they look at male figures in their lives as role models but Prime took it upon himself to become his own man.

From an early age, his experience of men were close male relatives who constantly abused women. Not understanding this behaviour, he lost trust in men. He became reserved, aloof and lacked confidence. “I did not know what to do and felt helpless. I remember every time I wanted to protect these women, I was called names and told I was letting women control me”, said Prime.

At the age of 14 he made a choice to reinvent himself and enrolled into an after school programme in Diepsloot where he found that many young people had similar ambitions and dreams. Soon after joining the programme he started making friends and interacting more with his peers. “When I first came to Afrika Tikkun I thought I was going to be judged but I have since learnt to be myself. And this has allowed other people to believe in me. In return, I have learnt who I am as a person”, said Prime.

The turning point in the young man’s life came when he attended an Afrika Tikkun camp. There, he learnt that being a man means that your behaviour should never be determined by how others treat you, but by the values you hold at your core

He now attends the Child and Youth Development programme, as well as Physics and Math Saturday classes at the Wings of Life Centre. As a result, his Maths has improved and he has learnt to replace the negatives with positives by focusing on things he loves (cycling, spelling bee and dancing). Prime is dedicating his lifeto seeing the beauty that this world has to offer and this explains his dream of becoming an Astronomer.